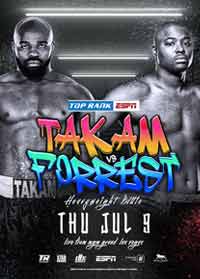 Review by AllTheBestFights.com: 2020-07-09, fight not so exciting between Carlos Takam and Jerry Forrest: it gets two stars.
The former Olympian Carlos Takam entered this fight with a boxing record of 38-5-1 (28 knockouts) and he is ranked as the No.37 heavyweight in the world. He lost two consecutive bouts between 2017 and 2018, against Anthony Joshua (Anthony Joshua vs Carlos Takam) and Dereck Chisora (4-stars fight, Dereck Chisora vs Carlos Takam), but then he has beat Senad Gashi, Craig Lewis and Fabio Maldonado.
His opponent, Jerry Forrest, has an official record of 26-3-0 (20 KOs=77%) and he entered as the No.55 in the same weight class. He was defeated by Jermaine Franklin last year but then he come back to win with Martez Williamson. Takam vs Forrest is the main event of the evening. Watch the video and rate this fight!