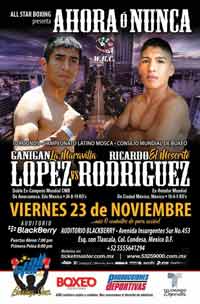 Review by AllTheBestFights.com: 2018-11-23, some good exchanges between Ganigan Lopez and Ricardo Rodriguez but it is not enough to get three stars: it gets two.

The former Wbc light-Flw champion Ganigan Lopez entered this fight with a pro record of 34-8-0 (19 knockouts) and he is ranked as the No.4 flyweight in the world (currently the #1 in this division is Cristofer Rosales) but he lost two out of his last three bouts, both against Ken Shiro (Ganigan Lopez vs Ken Shiro I and Ken Shiro vs Ganigan Lopez II); between these two fights he beat Efren Bautista.
His opponent, Ricardo Rodriguez, has an official boxing record of 16-6-0 (5 knockouts) and he entered as the No.48 super flyweight but he comes off three consecutive defeats: against Naoya Inoue (Naoya Inoue vs Ricardo Rodriguez), Daniel Lozano and Jonathan Gonzalez. Lopez vs Rodriguez is valid for the interim WBC Latino flyweight title. Watch the video and rate this fight!