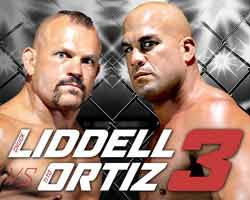 Review by AllTheBestFights.com: 2018-11-24, pretty good finish between Chuck Liddell and Tito Ortiz 3 but it is not enough to get three stars: it gets two.

The 48-year-old black belt in kajukenbo, karate and former Ufc light-Hw champion Chuck Liddell entered this fight with a mma record of 21-8-0 (67% finishing rate) but the last time he fought was in 2010 when he was defeated by Rich Franklin; before this bout he had also lost to Mauricio ‘Shogun’ Rua and Rashad Evans.
His opponent, the 43-year-old former Ufc light-Hw champ Tito Ortiz, has an official record of 19-12-1 (68% finishing rate) but he is not ranked as he hasn’t fought since January 21, 2017 when he defeated Chael Sonnen (Tito Ortiz vs Chael Sonnen); before this fight he had lost to Liam McGeary (Liam McGeary vs Tito Ortiz). In their previous bouts Liddell had beat Ortiz via ko/tko (both in 2004 and 2006); this third fight is the main event of Golden Boy MMA. Watch the video and rate this fight!

(Free embeddable video hosted on Youtube/Facebook and not uploaded by AllTheBestFights)
https://www.youtube.com/watch?v=77j2sBiMRog