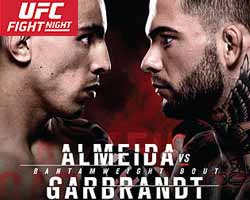 Review by AllTheBestFights.com: 2016-05-29, good fight between Thomas Almeida and Cody Garbrandt: it gets three stars (UFC Performance of the Night).

Both undefeated, the Brazilian Thomas Almeida entered this fight with a perfect record of 20-0-0 (95% finishing rate) and he is ranked as the No.14 bantamweight in the world while his opponent, Cody Garbrandt, has a mma record of 8-0-0 (88% ko/tko victory rate – he has never won via submission) and he entered as the No.35 in the same weight class. Almeida fought three times last year winning over Yves Jabouin (=Almeida vs Jabouin), Brad Pickett (=Pickett vs Almeida) and Anthony Birchak (=Almeida vs Birchak) while Garbrandt has already fought once in 2016 defeating Augusto Mendes (=Garbrandt vs Mendes). Almeida vs Garbrandt is the main event of the UFC Fight Night 88. Watch the video and rate this fight!