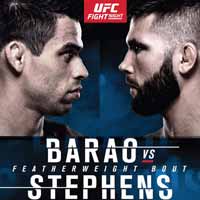 Review by AllTheBestFights.com: 2016-05-29, nice exchanges between Jeremy Stephens and Renan Barao: it gets three stars (UFC Fight of the Night).

The black belt in Brazilian jiu-jitsu and former Ufc Bw champion Renan Barao Pegado entered this fight with a professional mma record of 33-3-0 (70% finishing rate) and he is ranked as the No.4 bantamweight in the world (currently the #1 in this division is Dominick Cruz) but he lost two out of his last three bouts, both against TJ Dillashaw (=Barao vs Dillashaw I and Dillashaw vs Barao II), between these two fights he beat Mitch Gagnon (=Barao vs Gagnon).
His opponent, Jeremy Stephens (black belt in Bjj as well), has an official record of 24-12-0 (79% finishing rate) and he entered as the No.12 featherweight. He fought twice last year beating Dennis Bermudez (=Bermudez vs Stephens) but then he lost to Max Holloway (=Holloway vs Stephens). Barao vs Stephens is on the undercard of Thomas Almeida vs Cody Garbrandt – UFC Fight Night 88. Watch the video and rate this fight!