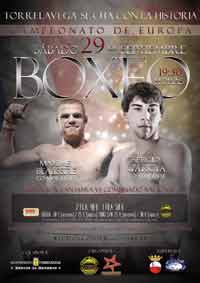 Review by AllTheBestFights.com: 2018-09-29, good fight between Sergio Garcia and Maxime Beaussire: it gets three stars.

The undefeated Sergio Garcia entered this fight with a perfect boxing record of 27-0-0 (13 knockouts) and he is ranked as the No.25 super welterweight in the world. In his last three bouts he has won over Felice Moncelli, Jeffrey Rosales and Giorgi Kerdikoshvili.
His opponent, Maxime Beaussire, has a record of 27-1-1 (10 knockouts) and he entered as the No.19 in the same weight class. He suffered his only loss when he faced Zakaria Attou last year (via split decision, Maxime Beaussire vs Zakaria Attou), after this fight he has beat Ambrosi Sutidze, Joffrey Jacob, Lenny Bottai and Cedric Pate. Garcia vs Beaussire is valid for the EBU European super welterweight title. Watch the video and rate this fight!