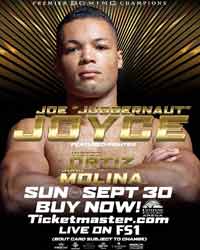 Review by AllTheBestFights.com: 2018-09-30, heavy exchanges between Joe Joyce and Iago Kiladze: it gets three stars.

The former Olympian Joe Joyce entered this fight with a perfect record of 5-0-0 (5 KOs=100%) and he is ranked as the No.51 heavyweight in the world. He has already fought four times in 2018 winning over Rudolf Jozic, Donnie Palmer (Joe Joyce vs Donnie Palmer), Lenroy Thomas (Joe Joyce vs Lenroy Thomas) and Ivica Bacurin (Joe Joyce vs Ivica Bacurin).
His opponent, Iago Kiladze, has an official boxing record of 26-3-0 (18 knockouts) and he entered as the No.143 in the same weight class but he comes off two consecutive losses, against Michael Hunter in June and Adam Kownacki in January (Adam Kownacki vs Iago Kiladze); before this bout, in 2017, he had beat Pedro Julio Rodriguez. Joyce vs Kiladze is on the undercard of Oscar Escandon vs Brandon Figueroa. Watch the video and rate this fight!