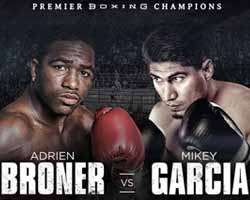 Review by AllTheBestFights.com: 2017-07-29, good fight between Miguel Angel Garcia and Adrien Broner: it gets three stars.

The undefeated world champion in three different weight classes Mikey Garcia entered this fight with a perfect record of 36-0-0 (30 KOs=83%) and he is ranked as the No.3 lightweight in the world (currently the #1 in this division is Robert Easter Jr). He fought twice between 2016 and 2017 beating Elio Rojas (=Garcia vs Rojas) and Dejan Zlaticanin (=Zlaticanin vs Garcia).
His opponent, the former world champion in four different weight classes Adrien Broner, has an official boxing record of 33-2-0 (24 knockouts) and he entered as the No.9 welterweight. ‘AB’ lost to Shawn Porter in 2015 (=Broner vs Porter) but then he has won over Khabib Allakhverdiev (=Broner vs Allakhverdiev), Ashley Theophane (=Broner vs Theophane) and Adrian Granados (=Broner vs Granados). Adrien Broner vs Mikey Garcia is the main event of the evening. Watch the video and rate this fight!