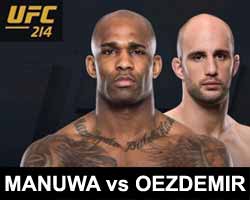 Review by AllTheBestFights.com: 2017-07-29, good start between Jimi Manuwa and Volkan Oezdemir: it gets three stars (UFC Performance of the Night).

Jimi Manuwa entered this fight with a pro record of 17-2-0 (94% finishing rate) and he is ranked as the No.6 light heavyweight in the world (currently the #1 in this division is Daniel Cormier). He lost to Anthony Johnson in 2015 (=Johnson vs Manuwa) but then he has won over Ovince Saint Preux (=St Preux vs Manuwa) and Corey Anderson (=Manuwa vs Anderson).
His opponent, Volkan Oezdemir, has an official mma record of 14-1-0 (79% finishing rate) and he entered as the No.10 in the same weight class. He suffered his only loss when he faced Kelly Anundson in 2014, since then he has won four bouts defeating Ovince Saint Preux (=St Preux vs Oezdemir) and Misha Cirkunov in 2017 (=Cirkunov vs Oezdemir). Volkan Oezdemir vs Jimi Manuwa is on the undercard of Daniel Cormier vs Jon Jones 2 – UFC 214. Watch the video and rate this fight!

Report broken video
« 2017 BOXING fight – Mikey Garcia vs Adrien Broner – full fight Video
2017 MMA fight – Robbie Lawler vs Donald Cerrone – fight Video UFC 214 »
HELP US!!! Since the CORONAVIRUS pandemic started, AllTheBestFights.com has struggled to survive! If you have enjoyed this website for the past 10 years, today we ask you for a little help: