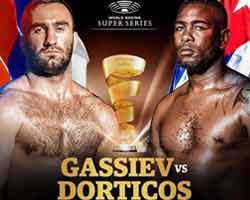 Review by AllTheBestFights.com: 2018-02-03, great performance by both boxers with and exciting finish: Murat Gassiev vs Yunier Dorticos is close to get four stars!

Both undefeated, the Ibf Cw champion Murat Gassiev entered this fight with a perfect boxing record of 25-0-0 (18 knockouts) and he is ranked as the No.4 cruiserweight in the world while his opponent, the Wba Cw champion Yunier Dorticos, has a record of 22-0-0 (21 KOs=95%) and he entered as the No.5 in the same weight class (currently the #1 in this division is Oleksandr Usyk). Between 2016 and 2017 Gassiev fought three times winning over Jordan Shimmell (4-stars fight, Gassiev vs Shimmell), Denis Lebedev (=Lebedev vs Gassiev) and Krzysztof Wlodarczyk (=Gassiev vs Wlodarczyk) while Dorticos fought twice beating Youri Kayembre Kalenga (=Kalenga vs Dorticos) and Dmitry Kudryashov (=Dorticos vs Kudryashov). Gassiev vs Dorticos is valid for the IBF World cruiserweight title and it is the semifinal of the World Boxing Super Series Cw tournamet. Watch the video and rate this fight!