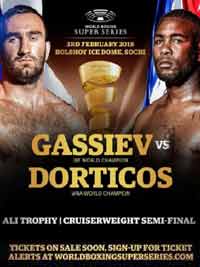 Review by AllTheBestFights.com: 2018-02-03, fight not so exciting between Maksim Vlasov and Olanrewaju Durodola: it gets two stars.

Maksim Vlasov entered this fight with a professional record of 41-2-0 (24 knockouts) and he is ranked as the No.9 cruiserweight in the world (currently the #1 in this division is Oleksandr Usyk). He was defeated by Gilberto Ramirez Sanchez in 2015 (=Ramirez vs Vlasov) but then he has won eleven consecutive bouts beating Tamas Lodi, Mussa Ajibu, Denton Daley and Vikapita Meroro in 2017 (=Vlasov vs Meroro).
His opponent, the 2008 Olympian Olanrewaju Durodola, has a record of 27-4-0 (25 KOs=93%) and he entered as the No.30 in the same weight class. He fought four times in 2017 losing once, the rematch with Dmitry Kudryashov (=Kudryashov vs Durodola 2); after this bout he has won over Karama Nyilawila and Manroy Sadiki. Vlasov vs Durodola is valid for the vacant WBC Silver cruiserweight title; undercard of Murat Gassiev vs Yunier Dorticos. Watch the video and rate this fight!