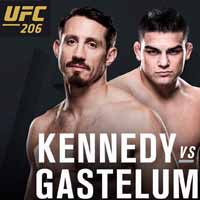 Review by AllTheBestFights.com: 2016-12-10, good fight between Tim Kennedy and Kelvin Gastelum: it gets three stars.

The Tuf 17 winner Kelvin Gastelum entered this fight with a pro record of 12-2-0 (67% finishing rate) and he is ranked as the No.6 welterweight in the world. He lost to Neil Magny last year (via split decision, Magny vs Gastelum) but he came back to win in 2016 against Johny Hendricks (=Hendricks vs Gastelum).
His opponent, the black belt in Bjj Tim Kennedy, has an official mma record of 18-5-0 (78% finishing rate) but he is not ranked as he hasn’t fought since September 27, 2014 when he was defeated by Yoel Romero (=Kennedy vs Romero). Before this bout he had beat current #1 Ufc Mw champion Michael Bisping (=Bisping vs Kennedy). Gastelum vs Kennedy is on the undercard of Max Holloway vs Anthony Pettis – UFC 206. Watch the video and rate this fight!