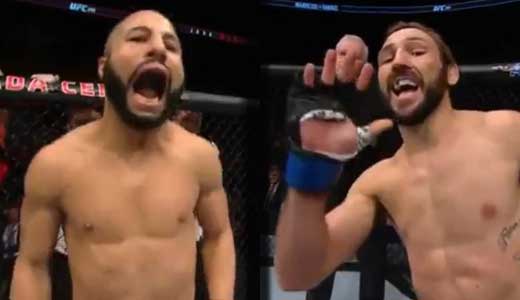 Review by AllTheBestFights.com: 2016-12-10, Lando Vannata vs John Makdessi gets four stars thanks to a spectacular finish: this is one of the best mma fights of 2016 (UFC Performance of the Night).

The black belt in karate and tae-kwon-do John Makdessi entered this fight with a professional mma record of 14-5-0 (64% ko/tko victory rate – he has never won via submission) and he is ranked as the No.77 lightweight in the world while his opponent, Lando Vannata, has an official record of 8-1-0 (87% finishing rate). Makdessi has fought once in 2016 beating Mehdi Baghdad while Vannata fought twice defeating Ramico Blackmon but then he lost to Tony Ferguson (4-stars fight, Ferguson vs Vannata). Makdessi vs Vannata is on the undercard of Max Holloway vs Anthony Pettis – UFC 206. Watch the video and rate this fight!