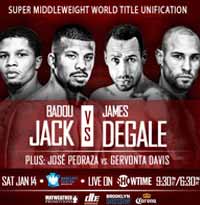 Review by AllTheBestFights.com: 2017-01-14, great fight between Gervonta Davis and Jose Pedraza: it gets three stars.

Both undefeated, the Ibf super-Fw champion Jose Pedraza entered this fight with a perfect record of 22-0-0 (12 knockouts) and he is ranked as the No.7 super featherweight in the world (currently the #1 in this division is Vasyl Lomachenko) while his opponent, Gervonta Davis, has a boxing record of 16-0-0 (15 KOs=94%) and he entered as the No.33 in the same weight class. Pedraza fought once in 2016 beating Stephen Smith (=Pedraza vs Smith) while Davis fought and won twice, with Guillermo Avila and Mario Antonio Macias. Jose Pedraza vs Gervonta Davis is valid for the IBF World super featherweight title (Pedraza’s third defense): undercard of James DeGale vs Badou Jack. Watch the video and rate this fight!