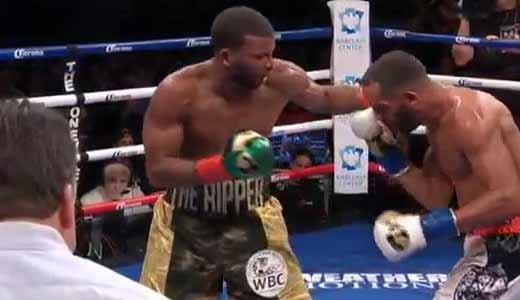 Review by AllTheBestFights.com: 2017-01-14, close and tough fight with an exciting finish: Badou Jack vs James DeGale is one of the best boxing fights of 2017 and it gets four stars!

The 2008 Olympic middleweight gold medalist and Ibf world champion James DeGale entered this fight with a boxing record of 23-1-0 (14 knockouts) and he is ranked as the No.4 super middleweight in the world (currently the #1 in this division is Gilberto Ramirez). His only loss occurred when he faced George Groves in 2011 (via split decision, Groves vs DeGale), since then he has won 13 consecutive bouts defeating Andre Dirrell (=DeGale vs Dirrell), Lucian Bute (=DeGale vs Bute) and Rogelio Medina in his last three (=DeGale vs Medina).
His opponent, the Wbc super-Mw champion Badou Jack, has an official record of 20-1-2 (12 knockouts) and he entered as the No.9 in the same weight class. He suffered his only loss when he faced Derek Edwards in 2014, after this bout he has collected four victories and one draw, with Lucian Bute (=Jack vs Bute); before this fight he had won over George Groves (=Groves vs Jack). James DeGale vs Badou Jack is valid for the WBC and IBF World super middleweight titles. Watch the video and rate this fight!