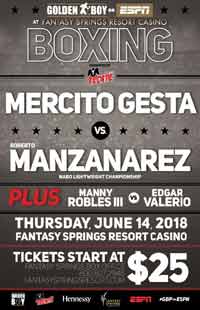 Review by AllTheBestFights.com: 2018-06-14, fight not particularly exciting between Mercito Gesta and Robert Manzanarez: it gets two stars.

Mercito Gesta entered this fight with a professional boxing record of 31-2-2 (17 knockouts) and he is ranked as the No.30 lightweight in the world but he comes off the loss against Jorge Linares (Jorge Linares vs Mercito Gesta). Before this bout, in 2017, he had beat Gilberto Gonzalez (Gesta vs Gonzalez) and Martin Honorio.
His opponent, Robert Manzanarez, has an official record of 36-1-0 (29 KOs=81%) and he entered as the No.65 in the same weight class. He suffered his only loss when he faced Alejandro Barrera in 2012, since then he has won 15 consecutive bouts taking revenge on Barrera in 2013 and beating Javier Lopez in 2018. Gesta vs Manzanarez is valid for the vacant WBO NABO lightweight title. Watch the video and rate this fight!