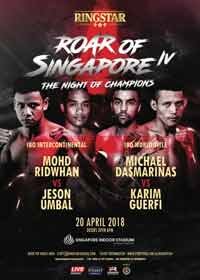 Review by AllTheBestFights.com: 2018-04-20, spectacular finish between Karim Guerfi and Michael Dasmarinas: it is close to get four stars!.

Karim Guerfi entered this fight with a professional boxing record of 26-3-0 (8 knockouts) and he is ranked as the No.15 bantamweight in the world. He suffered his last loss when he faced Zhanat Zhakiyanov in 2014, since then he has won six bouts beating Stephane Jamoye in 2017.
His opponent, Michael Dasmarinas, has an official record of 27-2-0 (18 knockouts) and he entered as the No.40 in the same weight class. He also lost in 2014, with Lwandile Sityatha (via split decision), but then he has collected nine consecutive victories defeating Mateo Handig and Worawatehai Boonjan last year. Guerfi vs Dasmarinas is valid for the vacant IBO World bantamweight title; undercard of Muhamad Ridhwan vs Jeson Umbal. Watch the video and rate this fight!