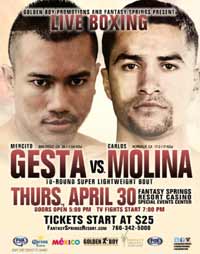 Review by AllTheBestFights.com: 2015-04-30, close fight but not so exciting: Mercito Gesta vs Carlos Molina gets two stars.

Mercito Gesta entered this fight with a professional boxing record of 28-1-1 (16 knockouts) and he is ranked as the No.26 lightweight in the world. He suffered his only defeat in 2012, against Miguel Vazquez (=Vazquez vs Gesta), since then he has fought just twice beating Edgar Riovalle and Luis Arceo (=Gesta vs Arceo).
His opponent, Carlos Molina, has an official record of 17-2-1 (7 knockouts) and he comes off two consecutive losses, against Amir Khan in 2012 (=Khan vs Molina) and Adrien Broner in 2014 (=Broner vs Molina). Gesta vs Molina is the main event of the evening. Watch the video and rate this fight!