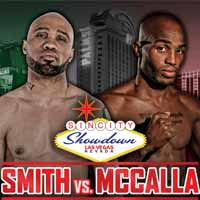 Review by AllTheBestFights.com: 2015-04-30, disappointing fight between Ishe Smith and Cecil McCalla: it gets two stars.

The former Ibf super-Ww champion Ishe Smith entered this fight with a pro boxing record of 26-7-0 (12 knockouts) and he is ranked as the No.9 super welterweight in the world (currently the #1 in this division is Saul ‘Canelo’ Alvarez) but he lost two out of his last three bouts, against Carlos Molina (=Smith vs Molina) and Erislandy Lara (=Lara vs Smith). Between these two losses he beat Ryan Davis (=Smith vs Davis).
His opponent, Cecil McCalla, has a record of 20-1-0 (7 knockouts) and he entered as the No.45 welterweight; he suffered his only defeat just three months ago, against Chris van Heerden. Smith vs McCalla is the main event of the night. Watch the video and rate this fight!