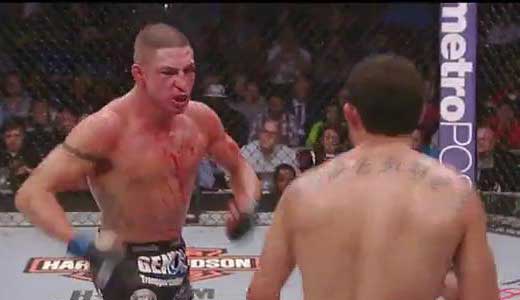 Review: 2013-10-19, the final part of the fight between Gilbert Melendez and Diego Sanchez was simply astonishing: brutal exchanges, blood, nonstop pace and big heart, so it could be a perfect candidate for Mma Fight of the Year 2013 but unfortunately the first part was “only” a very good one and not epic. For this reason Melendez vs Sanchez (UFC Fight of the Night) gets four stars and not five, but we would like to see a rematch since it was also a very close bout. Gilbert Melendez (21-3-0, 57% finishing rate) entered as the No.3 lightweight in the world while Diego Sanchez (24-5-0, 63% finishing rate) entered as the No.10 (currently the #1 in this weight division is Anthony Pettis). Melendez vs Sanchez is on the undercard of Cain Velasquez vs Junior dos Santos 3 – UFC 166. Watch the video!