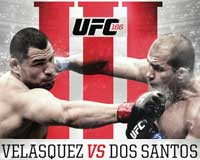 Review: 2013-10-19, great fight with some tough exchanges, we are sure they will face each other in the future…two real warriors: the third fight between Cain Velasquez and Junior dos Santos gets three stars. Cain Velasquez (12-1-0, 83% ko/tko victories – curiously he has never won by submission) entered as the No.1 heavyweight in the world while Junior dos Santos (16-2-0, 88% finishing rate) entered as the No.2. In their first fight ‘Cigano’ dos Santos defeated Velasquez by ko (November 12, 2011) while in their second bout Cain defeated JDS by unanimous decision (December 29, 2012); this third fight, main event of UFC 166, is valid for the UFC heavyweight title (Velasquez’s second defense). Watch the video!