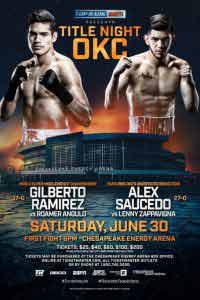 Review by AllTheBestFights.com: 2018-06-30, fight not so exciting between Gilberto Ramirez and Roamer Angulo: it gets two stars.

Both undefeated, the Wbo super-Mw champion Gilberto Ramirez Sanchez entered this fight with a perfect record of 37-0-0 (25 knockouts) and he is ranked as the No.2 super middleweight in the world (currently the #1 in this division is George Groves) while his opponent, Roamer Alexis Angulo, has a boxing record of 23-0-0 (20 KOs=87%) and he entered as the No.31 in the same weight class. In their last three bouts Ramirez has defeated Max Bursak (Ramirez vs Bursak), Jesse Hart (Ramirez vs Hart) and Habib Ahmed (Gilberto Ramirez Sanchez vs Habib Ahmed) while Angulo has won over Valerio Marte, Rolando Wenceslao Mansilla and Evert Bravo. Ramirez vs Angulo is valid for the WBO World super middleweight title (Ramirez’s fourth defense). Watch the video and rate this fight!

(Free embeddable video hosted on Youtube and not uploaded by AllTheBestFights)
https://www.youtube.com/watch?v=2awLaXIXulg