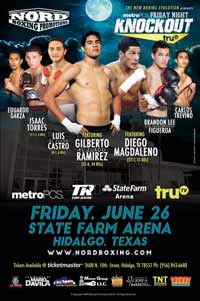 Review by AllTheBestFights.com: 2015-06-26, nice exchanges between Gilberto Ramirez Sanchez and Derek Edwards: it gets three stars.

The undefeated Gilberto Ramirez entered this fight with a perfect boxing record of 31-0-0 (24 KOs=77%) and he is ranked as the No.13 super middleweight in the world. He has already fought once in 2015 beating Maxim Vlasov (=Ramirez vs Vlasov).
His opponent, Derek Edwards, has an official record of 27-4-1 (14 knockouts) and he entered as the No.46 in the same weight class but he won just one out of his last four fights, against Badou Jack in 2014; after this fight he lost to Andre Dirrell in twelve rounds (=Dirrell vs Edwards). ‘Zurdo’ Ramirez vs Edwards is valid for the WBO International super middleweight title. Watch the video and rate this fight!