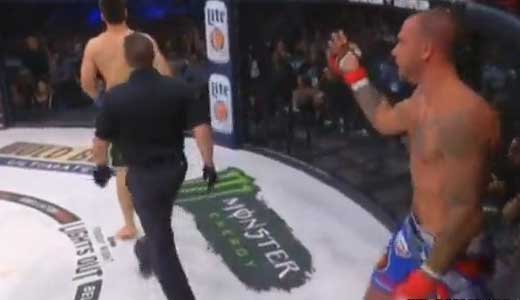 Review by AllTheBestFights.com: 2015-06-26, Joe Schilling vs Hisaki Kato gets four stars thanks to one of the best mma knockouts of the year!

The former Glory kickboxing champion Joe Schilling entered this fight with a pro mma record of 2-4-0 (18-7-0 in kickboxing) and he is ranked as the No.56 middleweight in the world while his opponent, Hisaki Kato, has a record of 4-1-0 (100% ko/tko victory rate – he has never won via submission). Schilling won over Melvin Manhoef last year (=Manhoef vs Schilling) but then he lost to Rafael Carvalho in 2015 (via split decision Schilling vs Carvalho). Schilling vs Kato is on the undercard of Cheick Kongo vs Alexander Volkov – Bellator 139; they also faced each other a second time on June 24, 2016 (=Joe Schilling vs Hisaki Kato 2). Watch the video and rate this fight!