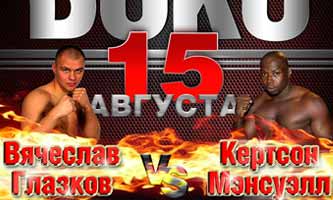 Review by AllTheBestFights.com: 2015-08-15, fight not particularly good between Vyacheslav Glazkov and Kertson Manswell: it gets two stars.

The undefeated Vyacheslav Glazkov entered this fight with a professional boxing record of 20-0-1 (12 knockouts) and he is ranked as the No.6 heavyweight in the world (currently the #1 in this division is Wladimir Klitschko) while his opponent, Kertson Manswell, has a record of 24-11-0 (18 KOs=75%). Both boxers have already fought once in 2015: Glazkow has won over Steve Cunningham (=Glazkov vs Cunningham) while Manswell lost to Mitchell Rogers. Glazkov vs Manswell is the main event of the evening. Watch the video and rate this fight!