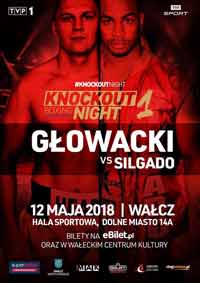 Review by AllTheBestFights.com: 2018-05-12, disappointing fight between Krzysztof Glowacki and Santander Silgado: it gets two stars.

The former Wbo Cw champion Krzysztof Glowacki entered this fight with a pro record of 29-1-0 (18 knockouts) and he is ranked as the No.4 cruiserweight in the world. He suffered his only loss when he faced current #1 Oleksandr Usyk in 2016 (Glowacki vs Usyk), after this bout he has won three fight beating Serhiy Radchenko in 2018 (Krzysztof Glowacki vs Serhiy Radchenko).
His opponent, Santander Silgado, has an official boxing record of 28-4-0 (22 KOs=79%) and he entered as the No.108 in the same weight class. He lost to Dmitry Kudryashov in 2016 but he came back to win in 2017 with Daniel Noguera. Glowacki vs Silgado is the main event of the evening. Watch the video and rate this fight!