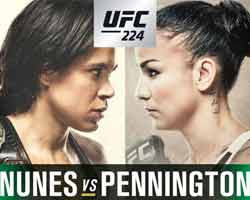 Review by AllTheBestFights.com: 2018-05-12, pretty good fight between Amanda Nunes and Raquel Pennington: it gets three stars.

The black belt in Brazilian jiu-jitsu and current Ufc women’s Bw champion Amanda Nunes entered this fight with a professional mma record of 15-4-0 (87% finishing rate) and she is ranked as the No.1 women’s bantamweight in the world. She suffered her last loss when she faced Cat Zingano in 2014 (Zingano vs Nunes), since then she has won six bouts beating Miesha Tate (Tate vs Nunes), Ronda Rousey (Nunes vs Rousey) and Valentina Shevchenko in his last three (Amanda Nunes vs Valentina Shevchenko 2).
Her opponent, Raquel Pennington, has an official record of 9-5-0 (44% finishing rate) but she is not ranked as he hasn’t fought since November 12, 2016 when she defeated Miesha Tate (Miesha Tate vs Raquel Pennington). She had lost to Holly Holm in 2015 (via split decision) but then she had won over Jessica Andrade, Bethe Correia and Elizabeth Phillips. Nunes vs Pennington, main event of Ufc 224, is valid for the Ufc Women’s bantamweight title (Nunes’ third defense). Watch the video and rate this fight!

(Free embeddable video hosted on Youtube and not uploaded by AllTheBestFights)
https://www.youtube.com/watch?v=pCP7W8LnE1g