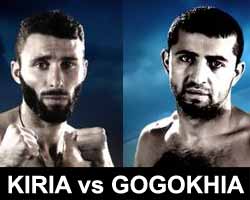 Review by AllTheBestFights.com: 2015-12-19, pretty good fight between Davit Kiria and Enriko Gogokhia: it gets three stars.

The black belt in karate and former Glory Lw champion Davit Kiria entered this fight with a pro kickboxing record of 24-9-0 (13 knockouts) and he is ranked as the No.4 super welterweight in the world. He has fought three times in 2015 winning over Zheng Zhayou and David Calvo but between these two fights he lost to Sitthichai Sitsongpeenong (=Kiria vs Sitthichai).
His opponent, Enriko Gogokhia, has a record of 40-6-0 (21 knockouts) and he entered as the No.11 in the same weight class. He suffered his last loss in 2013 when he faced Dzhabar Askerov (=Askerov vs Gogokhia 2), since then he has won seven consecutive bouts beating Steve Moxon in his last one. Kiria vs Gogokhia is the quarterfinal of the Kunlun middleweight championship tournament; undercard of Sitthichai Sitsongpeenong vs Marat Grigorian – Kunlun Fight 35. Watch the video and rate this fight!