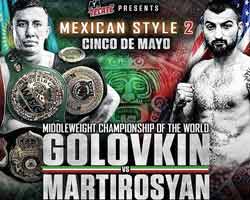 Review by AllTheBestFights.com: 2018-05-05, good fight between Gennady Golovkin and Vanes Martirosyan: it gets three stars.

The undefeated Wbc, Wba, Ibf and Ibo champion Gennady Golovkin entered this fight with a professional record of 37-0-1 (33 KOs=89%) and he is ranked as the No.1 middleweight in the world but he comes off the draw with Saul Canelo Alvarez (controversial decision, Saul Canelo Alvarez vs Gennady Golovkin). Before this bout GGG had beat Kell Brook in 2016 (4-stars fight, Golovkin vs Brook) and Daniel Jacobs in 2017 (Golovkin vs Jacobs).
His opponent, the former Olympian Vanes Martirosyan (who replaces Saul Alvarez, since the mexican tested positive for clenbuterol receiving a six month suspension), has a boxing record of 36-3-1 (21 knockouts) but he is not ranked as he hasn’t fought since May 21, 2016 when he was defeated by Erislandy Lara (Erislandy Lara vs Vanes Martirosyan 2). Before this bout, in 2015, he had lost to Jermell Charlo (Charlo vs Martirosyan) and beat Ishe Smith (Martirosyan vs Smith). Golovkin vs Martirosyan is valid for the IBF, IBO, WBA and WBC World middleweight titles (all held by GGG). Watch the video and rate this fight!

(Free embeddable video hosted on Youtube and not uploaded by AllTheBestFights)
https://www.youtube.com/watch?v=ihcZYNxjbtM