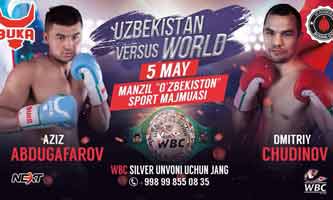 Review by AllTheBestFights.com: 2018-05-05, some good exchanges between Azizbek Abdugofurov and Dmitrii Chudinov but it is not enough to get three stars: it gets two.

The undefeated Azizbek Abdugofurov entered this fight with a perfect record of 10-0-0 (4 knockouts) and he is ranked as the No.32 super middleweight in the world. In his last three fights he has won over Tej Pratap Singh, Yevgenii Makhteienko and Alfonso Tissen.
His opponent, Dmitrii Chudinov, has a boxing record of 21-2-2 (13 knockouts) and he entered as the No.51 in the same weight class. He has already fought twice in 2018 losing to Lolenga Mock and defeating Siarhei Khamitski. Abdugofurov vs Chudinov is valid for the vacant WBC Silver super middleweight title. Watch the video and rate this fight!