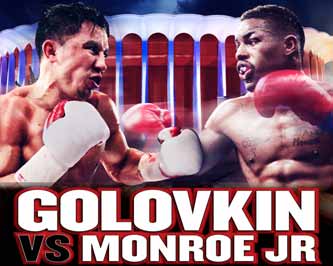 Review by AllTheBestFights.com: 2015-05-16, great fight between Gennady Golovkin and Willie Monroe Jr: it gets three stars.

The undefeated Gennady Golovkin entered this fight with a perfect boxing record of 32-0-0 (29 KOs=91%) and he is ranked as the No.1 middleweight in the world. In his last three bouts he won over Daniel Geale (=Golovkin vs Geale), Marco Antonio Rubio (=Golovkin vs Rubio) and Martin Murray (=Golovkin vs Murray).
His opponent, Willie Monroe Jr, has an official record of 19-1-0 (6 knockouts) and he entered as the No.17 in the same weight class. He suffered his only defeat in 2011 when he faced Darnell Boone (via split decision), since then he has collected nine consecutive victories winning the ESPN’s Boxcino Mw tournament in 2014, against Brandon Adams (=Adams vs Monroe Jr), and beating Brian Vera in his last bout (=Vera vs Monroe Jr). ‘GGG’ Golovkin vs Monroe is valid for the interim WBC, IBO, WBA middleweight titles (all held by Golovkin) but the Wbc belt is not on the line for Monroe since he didn’t comply with Wbc rules prior to the bout (30-day and 7-day pre-weigh-ins and medical examinations). Watch the video and rate this fight!