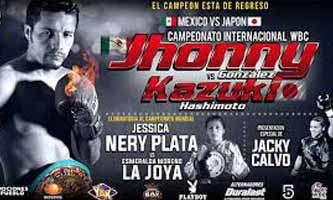 Review by AllTheBestFights.com: 2015-08-01, disappointing fight between Jhonny Gonzalez and Kazuki Hashimoto: it gets two stars.

The former world champion in two different weight classes Jhonny Gonzalez entered this fight with a professional boxing record of 57-9-0 (48 KOs=84%) and he is ranked as the No.10 featherweight in the world while his opponent, Kazuki Hashimoto, has a record of 11-4-0 (7 knockouts). Both boxers have fought once in 2015: Gonzalez lost to Gary Russell Jr (=Gonzalez vs Russell Jr) while Hashimoto has won over Chikashi Hayashizaki. Gonzalez vs Hashimoto is valid for the vacant WBC Continental Americas super featherweight title. Watch the video and rate this fight!