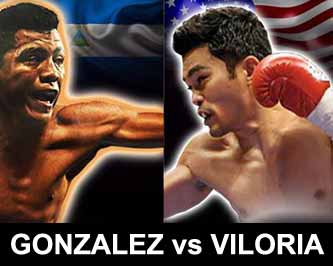 Review by AllTheBestFights.com: 2015-10-17, very nice and tough fight between Roman Gonzalez and Brian Viloria: it is close to get four stars!

The undefeated Roman Gonzalez entered this fight with a perfect record of 43-0-0 (37 KOs=86%) and he is ranked as the No.1 flyweight in the world. He has already fought twice in 2015 beating Valentin Leon (=Gonzalez vs Leon) and Edgar Sosa (=Gonzalez vs Sosa).
His opponent, the former world champion in two different weight classes Brian Viloria (Gonzalez has won world titles in three weight divisions), has a professional boxing record of 36-4-0 (22 knockouts) and he entered as the No.6 in the same weight class. He suffered his last loss in 2013 when he faced Juan Francisco Estrada (via split decision, Viloria vs Estrada), after this bout he has won four consecutive fights defeating Omar Soto in his last one (=Viloria vs Soto 2). ‘Chocolatito’ Gonzalez vs Viloria is valid for the WBC World flyweight title (Gonzalez’s third defense); undercard of Gennady Golovkin vs David Lemieux. Watch the video and rate this fight!