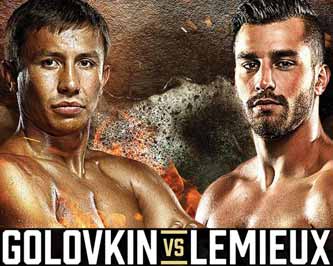 Review by AllTheBestFights.com: 2015-10-17, Gennady Golovkin vs David Lemieux was not the war we expected but still a great boxing fight: it gets three stars.

The undefeated Gennady Golovkin entered this fight with a perfect boxing record of 33-0-0 (30 KOs=91%) and he is ranked as the No.1 middleweight in the world. He has already fought twice in 2015 winning over Martin Murray (=Golovkin vs Murray) and Willie Monroe Jr (=Golovkin vs Monroe).
His opponent, David Lemieux, has an official record of 34-2-0 (31 KOs=91%) and he entered as the No.5 in the same weight class. He suffered two consecutive defeats in 2011 when he was just 22 years old: against Marco Antonio Rubio (=Rubio vs Lemieux) and Joachim Alcine (=Alcine vs Lemieux), but then he has won nine consecutive bouts beating Hassan N’Dam N’Jikam in his last one (=Lemieux vs N’Dam). ‘GGG’ Golovkin vs Lemieux is valid for the interim WBC, IBO, WBA Super World middleweight titles (held by Golovkin) plus the IBF Mw belt (held by Lemieux). Watch the video and rate this fight!