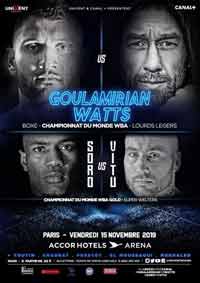 Review by AllTheBestFights.com: 2019-11-15, good fight between Arsen Goulamirian and Kane Watts: it gets three stars.

The undefeated interim Wba Cw champion Arsen Goulamirian entered this fight with a perfect record of 24-0-0 (16 knockouts) but he is not ranked as he hasn’t fought since October 20, 2018 when he defeated Mark Flanagan (Arsen Goulamirian vs Mark Flanagan); before this, in 2018, he had also beat Ryad Merhy (Arsen Goulamirian vs Ryad Merhy).
His opponent, Kane Watts, has an official boxing record of 21-3-0 (13 knockouts) and he entered as the No.86 in the same weight class. He lost to Danny Green in 2016, but then he has beat Yuberti Suarez Diaz, Kuldep Singh and Jayden Joseph. Goulamirian vs Watts is valid for the WBA Super World cruiserweight title. Watch the video and rate this fight!