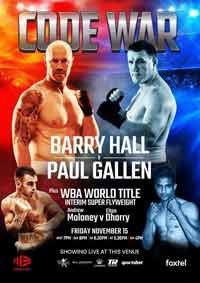 Review by AllTheBestFights.com: 2019-11-15, fight not so exciting between Andrew Moloney and Elton Dharry: it gets two stars.

The undefeated Andrew Moloney entered this fight with a perfect boxing record of 20-0-0 (13 knockouts) and he is ranked as the No.8 super flyweight in the world (currently the #1 in this division is Juan Francisco Estrada). In his last three fights he has won over Luis Concepcion (Andrew Moloney vs Luis Concepcion), Miguel Gonzalez (Andrew Moloney vs Miguel Gonzalez) and Selemani Bangaiza.
His opponent, Elton Dharry, has a record of 24-5-1 (14 knockouts) and he entered as the No.75 bantamweight. He suffered his last loss when he faced Isander Beauchamp in 2009, since then he has won 21 consecutive bouts defeating Gilberto Pedroza in 2019. Moloney vs Dharry is valid for the interim WBA World super flyweight title; undercard of Barry Hall vs Paul Gallen. Watch the video and rate this fight!