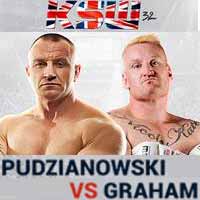 Review by AllTheBestFights.com: 2015-10-31, fight not particularly good between Mariusz Pudzianowski and Peter Graham: it gets two stars.

The former World’s Strongest Man champion Mariusz Pudzianowski entered this fight with a professional mma record of 9-3-0 (56% finishing rate) and he is ranked as the No.81 heavyweight in the world. Pudzian suffered his last defeat in 2013 when he faced Sean McCorkle the first time (=Pudzianowski vs McCorkle I); after this bout he has won four bouts taking revenge on McCorkle (=Pudzianowski vs McCorkle II) and beating Rolles Gracie in his last one (=Pudzianowski vs Gracie Jr).
His opponent, the black belt in karate and former Iska kickboxing world champion Peter Graham, has an official record of 10-9-0 (90% ko/tko victory rate – he has never won via submission) and he entered as the No.60 in the same weight class but he lost four out of his last five mma bouts, the last one against Karol Bedorf (=Graham vs Bedorf). Pudzianowski vs Graham is the main event of KSW 32. Watch the video and rate this fight!