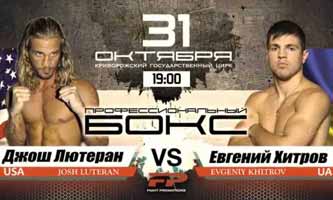 The 2011 world amateur Mw boxing champion Ievgen Khytrov entered this fight with a perfect boxing record of 11-0-0 (10 KOs=91%) and he is ranked as the No.16 middleweight in the world while his opponent, Josh Luteran, has an official record of 14-2-0 (9 knockouts). Khytrov has already fought four times in 2015 beating Nick Brinson in his last one (=Khytrov vs Brinson). Khytrov vs Luteran is valid for the vacant WBC (USNBC) and NABF middleweight titles. Watch the video and rate this fight!