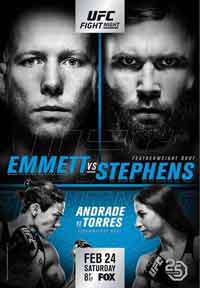 Review by AllTheBestFights.com: 2018-02-24, pretty good fight between Mike Perry and Max Griffin: it gets three stars.

Mike Perry entered this fight with a pro record of 11-2-0 (100% ko/tko victory rate – he has never won via submission) and he is ranked as the No.24 welterweight in the world. He fought three times last year defeating Jake Ellenberger (Ellenberger vs Perry) and Alex Reyes (Perry vs Reyes) but then he lost to Santiago Ponzinibbio (Santiago Ponzinibbio vs Mike Perry).
His opponent, Max Griffin, has an official mma record of 13-4-0 (69% finishing rate) and he entered as the No.91 in the same weight class but he lost two out of his last three bouts, against Colby Covington and Elizeu Zaleski dos Santos; between these two fights he beat Erick Montano. Perry vs Griffin is on the undercard of Josh Emmett vs Jeremy Stephens – UFC on Fox 28. Watch the video and rate this fight!

(Free embeddable video hosted on Twitter and not uploaded by AllTheBestFights)