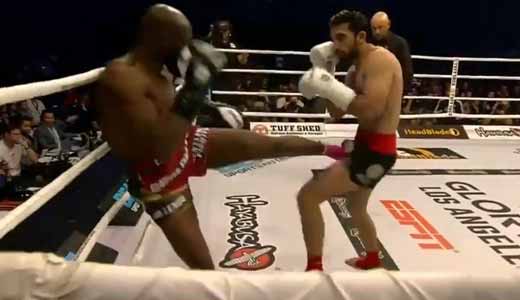 Review by AllTheBestFights.com: 2016-05-13, nice exchanges with a fantastic finish: Marat Grigorian vs Djime Coulibaly is one of the best kickboxing fights of 2016 and it gets four stars!

The 2015 K-1 World Gp champion Marat Grigorian entered this fight with a pro kickboxing record of 45-9-2 (25 knockouts) and he is ranked as the No.7 super welterweight in the world. He has already fought twice in 2016 beating Anatoly Moiseev (=Grigorian vs Moiseev) and losing to Sitthichai Sitsongpeenong (=Sitthichai vs Grigorian 2).
His opponent, Djime Coulibaly, has an official record of 51-13-4 (18 knockouts) and he entered as the No.12 in the same weight class but he lost two out of his last three fights, against Josh Jauncey (=Jauncey vs Coulibaly) and Chingiz Allazov; between these two bouts he beat Saro Presti. Grigorian vs Coulibaly is on the undercard of Simon Marcus vs Dustin Jacoby – Glory 30. Watch the video and rate this fight!