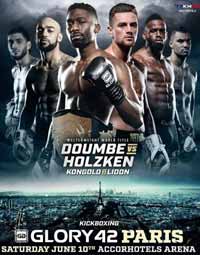 Review by AllTheBestFights.com: 2017-06-10, disappointing fight between Murthel Groenhart and Harut Grigorian 2: it gets two stars.

The 2012 K-1 World Max champion Murthel Groenhart entered this fight with a kickboxing record of 65-23-3 (36 knockouts) and he is ranked as the No.4 super middleweight in the world. He lost to Nieky Holzken in 2016 (=Holzken vs Groenhart 3) but he came back to win in 2017 beating Thongchai Sitsongpeenong (=Groenhart vs Sitsongpeenong) and Alan Scheinson.
His opponent, Harut Grigorian, has an official record of 53-10-0 (32 knockouts) and he entered as the No.11 in the same weight class. He lost to Yoann Kongolo last year (=Kongolo vs Grigorian) but then he has won over Danijel Solaja and Pavol Garaj. In their first fight Groenhart beat Grigorian via ko (May 27, 2012, Groenhart vs Grigorian I); this second fight is on the undercard of Cedric Doumbe vs Nieky Holzken 2 – Glory 42. Watch the video and rate this fight!