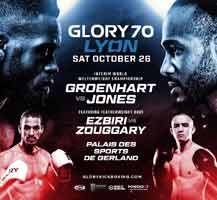 Review by AllTheBestFights.com: 2019-10-26, pretty good finish between Murthel Groenhart and Troy Jones but it is not enough to get three stars: it gets two.

The former Glory Ww and 2012 K-1 World Max champion Murthel Groenhart entered this fight with a professional kickboxing record of 68-24-3 (39 knockouts) and he is ranked as the No.5 super middleweight in the world but he lost two out of his last three fights, against Harut Grigorian (Murthel Groenhart vs Harut Grigorian 3) and Alim Nabiev (Murthel Groenhart vs Alim Nabiev); between these two bouts he beat Mohammed Jaraya (Murthel Groenhart vs Mohammed Jaraya).
His opponent, Troy Jones (who replaces Cedric Doumbe), has an official record of 13-1-0 (11 KOs=85%); he suffered his only loss when he faced Pornsawan Petchrambo in 2017, since then he has won seven consecutive fights defeating Omari Boyd and Ammari Diedrick in 2019. Groenhart vs Jones, main event if Glory 70, is valid for the interim Glory welterweight title. Watch the video and rate this fight!

(Free embeddable video hosted on ok.ru/Youtube and not uploaded by AllTheBestFights)