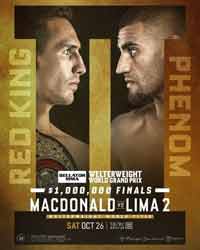 Review by AllTheBestFights.com: 2019-10-26, Paul Daley vs Saad Awad gets three stars thanks to a good finish.

Paul Daley entered this fight with a mma record of 41-17-2 (78% ko/tko victory rate – he has never won via submission) and he is ranked as the No.40 welterweight in the world. He lost two consecutive bouts between 2018 and 2019, against Jon Fitch (Jon Fitch vs Paul Daley) and Michael ‘Venom’ Page (Michael Page vs Paul Daley), but then he has beat Erick Silva (Paul Daley vs Erick Silva).
His opponent, Saad Awad, has an official record of 23-12-0 (73% finishing rate) and he entered as the No.177 in the same weight class but he comes off three consecutive defeats, against Benson Henderson (Benson Henderson vs Saad Awad), Brandon Girtz (Saad Awad vs Brandon Girtz) and Goiti Yamauchi. ‘Semtex’Daley vs Awad is on the undercard of Rory MacDonald vs Douglas Lima 2 – Bellator 232. Watch the video and rate this fight!