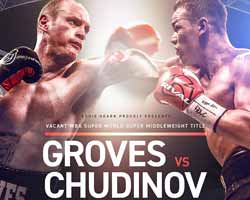 Review by AllTheBestFights.com: 2017-05-27, nice exchanges between George Groves and Fedor Chudinov: it gets three stars.

George Groves entered this fight with a pro record of 25-3-0 (18 knockouts) and he is ranked as the No.2 super middleweight in the world (currently the #1 in this division is Gilberto Ramirez). He lost to Badou Jack in 2015 (via split decision, Groves vs Jack), but then he has won four bouts beating Martin Murray (=Murray vs Groves) and Eduard Gutknecht in his last two (=Groves vs Gutknecht).
His opponent, the former Wba super-Mw champion Fedor Chudinov, has an official boxing record of 14-1-0 (10 knockouts) but he is not ranked as he hasn’t fought since February 20, 2016 when he was defeated by Felix Sturm in their rematch (via majority decision, Sturm vs Chudinov 2). Before this fight he had won over Frank Buglioni (=Chudinov vs Buglioni). George Groves vs Fedor Chudinov is valid for the WBA Super World super middleweight title; undercard of Kell Brook vs Errol Spence Jr. Watch the video and rate this fight!