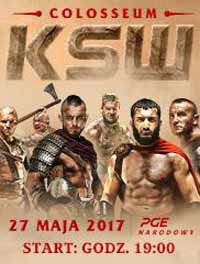 Review by AllTheBestFights.com: 2017-05-27, good finish between Fernando Rodrigues Jr and Marcin Rozalski: it gets three stars.

The KSW Hw champion Fernando Rodrigues Jr entered this fight with a professional record of 11-2-0 (91% finishing rate) and he is ranked as the No.30 heavyweight in the world while his opponent, the former WKA kickboxing champion Marcin Rozalski, has a mma record of 6-4-0 (83% finishing rate). Both fighters had lost once in 2015 but then they came back to win in 2016: ‘Santo Forte’ Rodrigues was defeated by Oli Thompson and then he beat Yosef Ali Mohammad and Karol Bedorf (=Bedorf vs Rodrigues Jr) while Rozalski had lost to James McSweeney and won over Mariusz Pudzianowski (=Pudzianowski vs Rozalski). Marcin Rozalski vs Fernando Rodrigues Jr is valid for the KSW heavyweight title (Rodrigues’ first defense); undercard of Mamed Khalidov vs Borys Mankowski – KSW 39. Watch the video and rate this fight!