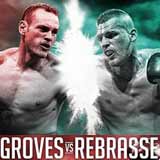 Review: 2014-09-20, good fight between George Groves and Christopher Rebrasse: it gets three stars. George Groves entered this fight with a professional boxing record of 19-2-0 (15 KOs=79%) and he is ranked as the No.10 super middleweight in the world (currently the #1 in this division is Andre Ward), but he lost his last two fights, both against Carl Froch and valid for the IBF and WBA super middleweight titles (=Froch vs Groves I and Froch vs Groves II):
His opponent, Christopher Rebrasse, has an official record of 22-2-3 (6 knockouts) and he entered as the No.20 in the same weight class, he suffered his last loss in 2011 when he faced the undefeated Rachid Jkitou, since then he has collected six wins and two draws. Groves vs Rebrasse is valid for the EBU and vacant WBC Silver super middleweight titles. Watch the video and rate this fight!