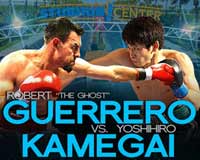 Review: 2014-06-21, good fight thanks to a great performance by both boxers: Robert Guerrero vs Yoshihiro Kamegai gets three stars. Robert Guerrero entered this fight with a pro boxing record of 31-2-1 (18 knockouts) but is not ranked as he hasn’t fought since May 4, 2013 when he was defeated by Floyd Mayweather Jr (=Mayweather vs Guerrero); ‘The Ghost’ Guerrero has won world titles in four different weight classes.
His opponent, Yoshihiro Kamegai, has a record of 24-1-1 (21 KOs=87%) and he entered as the No.46 welterweight in the world, he suffered his only defeat in 2013 when he faced the WBA world light-Ww champion Johan Perez; after that bout he has fought and won twice. Guerrero vs Kamegai is the main event of the evening. Watch the video and rate this fight!

Refresh the page if you encounter any trouble with this video