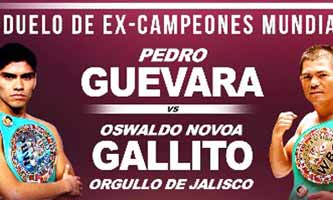 Review by AllTheBestFights.com: 2017-05-13, some good exchanges between Pedro Guevara and Oswaldo Novoa but it is not enough to get three stars: it gets two.

The former Wbc light-Flw champion Pedro Guevara entered this fight with a pro record of 29-2-1 (17 knockouts) and he is ranked as the No.2 light flyweight in the world (currently the #1 in this division is Ganigan Lopez). He lost to Yu Kimura in 2015 (via split decision, Guevara vs Kimura) but then he has won over Jether Oliva, Ruben Montoya (=Guevara vs Montoya) and Jerry Tomogdan (=Guevara vs Tomogdan).
His opponent, the former Wbc minimumweight champion Oswaldo Novoa, has an official boxing record of 14-7-3 (9 knockouts) but ‘El Gallito’ is not ranked as he hasn’t fought since March 19, 2016 when he was defeated by Saul Juarez (=Juarez vs Novoa 3). Pedro Guevara vs Oswaldo Novoa is on the undercard of Jessica Chavez vs Ana Arrazola. Watch the video and rate this fight!