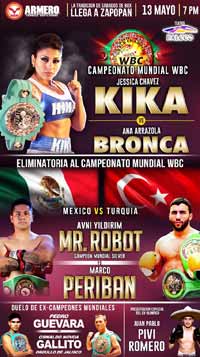 The undefeated Avni Yildirim entered this fight with a perfect boxing record of 15-0-0 (10 knockouts) and he is ranked as the No.10 super middleweight in the world (currently the #1 in this division is Gilberto Ramirez). In his last three bouts he has won over Aaron Pryor Jr, Schiller Hyppolite (=Yildirim vs Hyppolite) and Aliaksandr Sushchyts.
His opponent, Marco Antonio Periban, has a record of 25-3-1 (16 knockouts) and he entered as the No.31 in the same weight class. He lost two consecutive bouts in 2014, against J’Leon Love and James DeGale (=DeGale vs Periban) but then he has won five fights. Avni Yildirim vs Marco Antonio Periban is valid for the vacant WBC International super middleweight title; undercard of Jessica Chavez vs Ana Arrazola. Watch the video and rate this fight!