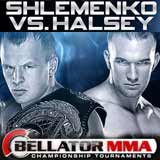 Review: 2014-09-26, great start between Alexander Shlemenko and Brandon Halsey: it gets three stars. Alexander Shlemenko entered this fight with a professional mma record of 50-8-0 (74% finishing rate) and he is ranked as the No.19 middleweight in the world, he has already fought twice in 2014 beating Brennan Ward (=Shlemenko vs Ward) but then he moved up in weight class to the light heavyweight division to face Tito Ortiz and he lost (=Shlemenko vs Ortiz).
His opponent, the undefeated Brandon Halsey, has an official record of 7-0-0 (57% finishing rate) and he entered as the No.37 in the same weight class, he has fought twice as well in 2014 beating Joe Pacheco in April and Brett Cooper in July (final of the Bellator Mw tournament – season 10, Cooper vs Halsey). Shlemenko vs Halsey, main event of Bellator 126, is valid for the Bellator middleweight title (Shlemenko’s fourth defense). Watch the video and rate this fight!